Why and how to test your Shiny apps

Shiny is excellent tool for making dashboards and one that we often use, but if you’ve ever made a Shiny app you’ve probably experienced the frustration of things not working quite the way you intended.

In this post, I’ll explain how testing Shiny apps can help make them more robust and ultimately save you time. We’ll explore examples showing how you can test functionality of your Shiny app using testthat, shinytest, and the shiny::testServer() function.

Throughout this post, I assume you’re already familiar with the testthat package, which is used for automated testing. If not, you can read much more about how to use it in the chapter on testing in the R Packages book.

Why should I write tests?

It might seem like writing tests adds a lot of overhead, but in fact including tests can ultimately save you a lot of time and pain.

Here are some advantages to testing your Shiny apps (and of testing more generally):

What do I need to test?

Although the kinds of tests you need will depend on your specific application, in general you should consider the following:

The two main tools I’ll be using are the shinytest package and the testServer() function included in the shiny package. This RStudio article and the shinytest documentation are excellent resources for more information.

Whereas testServer() only tests the server part of your Shiny app, shinytest can be used to test the UI part as well. It runs your app in a headless browser, so it’s much more similar to how an app would actually run.

Though there is a lot of overlap in how they can be used and a lot of tests could be written using either, usually one will be a better choice.

I recommend using testServer() when you need access to the internals of the app rather than just the outputs.

The shinytest package is a better option if you want to test a part of the app that relies on JavaScript (this includes updating inputs and modal dialogs), or if you’re testing that the app looks as intended.

In practice, you’ll almost certainly find you’ll need to use both tools to thoroughly test your app. Read on for examples of how and when to use testServer() and shinytest.

To demonstrate the different types of tests, I’ve made a simple app. The app uses data collected through the Frog Census run by Melbourne Water. The Frog Census is a citizen science project in which people download an app that they can use to record frog calls. The dataset is available to download here.

The functionality of the Shiny app is very simple: you select which frog species you’re interested in, and observations of those species are shown on the map. If you click on a point on the map, a table will appear with more information about that observation (such as date, time, and the number of frogs observed).

A simple Shiny app that shows the locations of frogs observed in the Frog Census.

If you’re familiar with Shiny, you’ll probably have experienced how frustrating it can be when the reactive flow of your app is not working as expected. Sometimes an observer isn’t triggered when you think it should be or something updates when it shouldn’t. In these cases, including tests of whether the reactives are all behaving as intended can help identify where the problem is.

We can use testServer() to test whether changing the selected species updates the reactive data.table.

To use testServer(), you must specify which function is being tested (in this case the server() function, but this could also be a server function within a module). Input values are set using session$setInputs and reactives defined within the server function can be accessed to make sure they are behaving as expected.

This can be easily be turned into a test using test_that() by adding some expectations.

Here’s an example of how you would test that the filtered data.table rv_frogs() has the expected number of rows and includes only the selected species:

You can also use the shinytest package for these kinds of tests, but it can be a little more awkward. With shinytest you can only access the objects that the browser sees, whereas with testServer() all the internals of your server function are visible. This means that because an reactive like rv_frogs() is not an output, shinytest won’t be able to access it.

There is a way around this, however. We can export objects for testing purposes, which makes them visible to shinytest. For example, we can export rv_frogs() by adding this line to server.R:

This allows us to access this object and test it’s correct in a similar way as we did using testServer(). We set inputs using the setInputs method.

Using shinytest here is slower and a little more difficult than simply using testServer(), so in this case testServer() would be the better choice.

You can also test the server functions within modules using testServer(). This works in almost exactly the same way as testing the server function in server.R, except that you also need to supply values for any arguments the module has.

Tests for modules have this basic structure (assuming example_server is the server function in a module):

You can set input values and access reactives and outputs in the same way as in the earlier example. Additionally, objects that are returned from the module can be accessed using session$getReturned(). This can be very helpful when you have a lot of communication between modules and need to be sure you’re passing the correct objects between them.

If you use one of the standard shiny inputs like selectInput or checkboxInput, the input value is set via input bindings. This is the case for input$pi_species in the Frog Census app, which is set using shinyWidget’s pickerInput.

However, some inputs don’t have an input binding and these can be a little harder to work with. This is the case for many htmlwidgets like DT and mapdeck. Interactions with these components like clicking on a row of a table will set an input value, but they do so without using an input binding.

For example, one of the inputs in the Frog Census app is a map click (input$map_scatterplot_click). This tells the app which point on the map has been clicked and which observation to select and show in the table. However, unlike input$pi_species in the examples above, this input value is not set via an input binding.

We can nonetheless set a value for input$map_scatterplot_click and test that this results in the expected behaviour using testServer().

Here is the part of the code that translates a map click into a row of the observations table:

We can set the value for input$map_scatterplot_click in the same way we did for input$pi_species above and then check the correct row of the observations data.table is selected:

In the Frog Census app, there is a modal dialog that appears if you de-select all species and warns that you must select at least one species.

The Frog Census Shiny app showing the modal dialog box warning that at least one species must be selected.

The picker input is also automatically updated so that one option is selected. Here is the code responsible:

This is a particularly annoying functionality of the app to test manually, as it requires de-selecting every one of the frog species listed. Fortunately, automated testing makes this a lot easier.

The modal dialog and picker input update can’t be tested using testServer() since both rely on JavaScript. We can see that if we set input$pi_species to NULL it is not updated:

However, if we instead use shinytest we can see that input$pi_species does update:

For testing elements of the app that rely on JavaScript (such as updating inputs and default values for inputs), we need to use shinytest.

We’ve now tested that our input value updates as expected, but we still need to test that the modal dialog appears. This is a little trickier.

For this we’ll use shinytest to take a snapshot (a .png file in this case) of the app after setting the input$pi_species to NULL. We will then use testthat::expect_snapshot_file() to test that the snapshot matches the reference snapshot already saved. If the test has never been run before, the first snapshot taken will be saved and will serve as the reference for future tests. It’s important to look at it to confirm it actually shows the behaviour you want to test.

In this case, we want a snapshot of the Shiny app showing the modal dialog box warning that you must select at least one species.

Note that testthat::expect_snapshot_file() can’t be used to test interactively. The following test code will only work if put in it’s own file (which I called test-modal.R) and then run using testthat::test_file("tests/testthat/test-modal.R"). 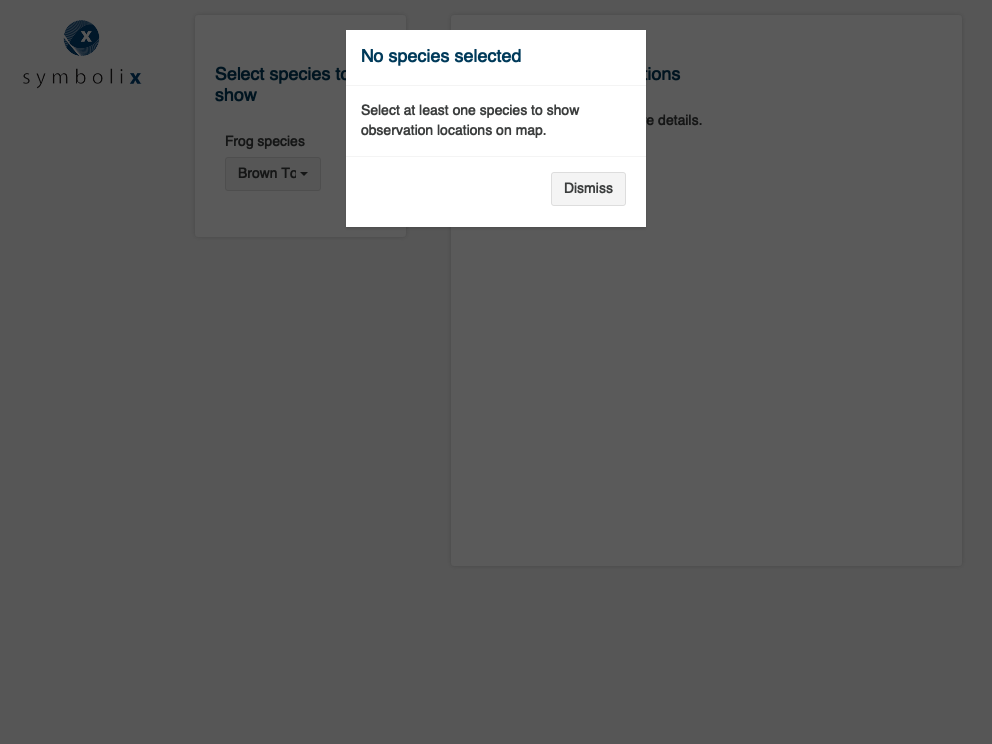 Although snapshot testing is the only way to test certain parts of a Shiny app, you should use it only when there’s no alternative. Even very tiny differences between snapshots will cause a test to fail, so simply running the test on a different computer can lead to a failed test.

These are some resources I found extremely helpful in learning about how to test Shiny apps: